The dirham is the legal tender in Morocco, made up of 100 units each of them called a santim. Dirhams are the official Moroccan currency since 1882, and they come in coins of nine denominations and banknotes of four denominations.

Before 1882, when the new monetary system was introduced, Morocco issued copper coins called falus, silver dirhams and golden benduqui. In 1882, the dirham became a multiple of the rial coins.

In 1960, after the end of the French protectorate, the country introduced the dirham again to replace francs (1 dirham equalled 100 francs). This currency still circulated until 1974.

The current series of banknotes, , issued in the reign of Mohammed VI, circulates together with the series issued in the reign of his father, King Hassan II. Both series circulate together normally, but the notes issued under the former monarch are being gradually replaced by the new ones. The colours for both series are the same, unchanged, only the design of the new series varies with the effigy of the new monarch and its more modern graphic design and newer security measures.

Nowadays there are 20, 50, 100 and 200 dirham notes in circulation. For more information check Bank Al-Maghrib’s web page, which issues the banknotes and coins for this currency. 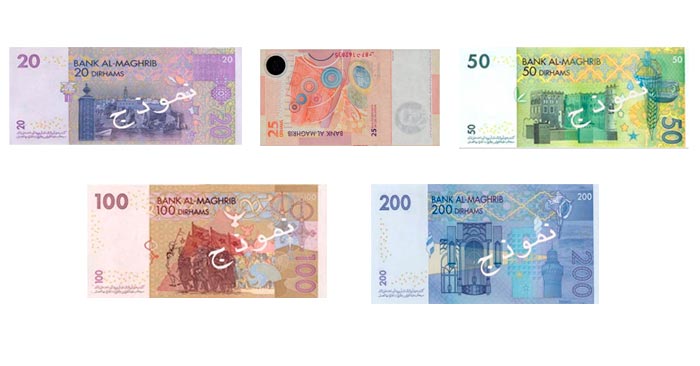 Current dirham coins in use

The current legal tender coins were issued in the year 2002, and they gradually replaced the former series bearing the bust of King Hassan II. These 5 and 10 dirham coins are bimetallic and 1 centime coins are no longer minted, although they were never officially removed from circulation. In 2002 a new 2 dirham denomination was introduced. 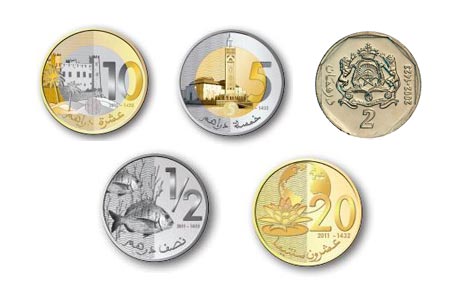